Are you a Psycho?

In honor of Halloween, I have a fun little test. I actually have to hand it to Big Black Cat for reminding me of it just in time for Halloween.
The rules for the Psycho test.
1. Read all the text
2. Write down your answer
3. Do not change your answer, so write it down somewhere (or post it below)
4. I’ll respond to posters with the results as I get them, but I’ll post the answer to the psycho test tomorrow.
**I don't think I really need to mention, but this test doesn’t actually tell you if you’re a psycho, but the answer might creep you out
Are you ready?
The Psycho Test
Maria’s mother died. At the funeral, Maria sees a really hot guy. She’d love to try to meet up with him, but funerals aren’t really the place for that sort of thing, so Maria finds out who he is instead. The really hot guy is the son of one of her father’s friends.
Two weeks later, Maria kills her sister.
Why?
Post your answers, and I’ll let you know if you’re a psycho or not…
Oh, and just so as everyone knows, according to this test, I’m a psycho. (Shocked?)
Posted by Rena at 8:58 AM 5 comments:

Email ThisBlogThis!Share to TwitterShare to FacebookShare to Pinterest
Labels: THAT dog

People often ask me what is so great about being a scientist, and here it is in a nutshell.
Today a good friend of mine defended her dissertation (Yay Dr. Ninja!). We had champagne afterward in the director’s office. One of his jobs is to collect meteorites and have them categorized. So he passed around a meteorite.
A meteorite that might be from Mars.
Seriously, I just held a chunk of rock that’s probably worth a million dollars (it was about the size of my fist). No matter what it turns out to be (though Mars is pretty damned likely given the other evidence, we’ll have to wait for the smoking gun later), this rock fell from the sky and is a piece of another planet.
Yeah, I held a rock from another planet today. That’s why being a scientist is so cool.
Posted by Rena at 10:38 AM 4 comments:

Email ThisBlogThis!Share to TwitterShare to FacebookShare to Pinterest
Labels: For Science

It is better to Give than Receive, Part 2: Giving

Email ThisBlogThis!Share to TwitterShare to FacebookShare to Pinterest
Labels: Learn from my fail, The Whole Package

I lived through Balloon Fiesta


One of the great things about living in Albuquerque (and seriously, I’m so immature that every time I write the name of the city, I think of Weird –Al’s song Albuquerque), is Balloon Fiesta.
It starts early, and by early I mean that in other times in my life I would have simply stayed up to attend the launch at dawn. This year we left the house at 4:45 and made the field by 5:30. Since the action doesn’t actually start until 6, but when it does: 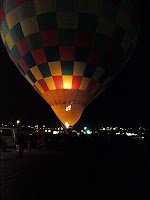 As you can see, hot air balloons in the dark before dawn look rather a lot like lanterns. They actually work on much the same principle, so just imagine that scene from Tangled (and if you haven’t seen Tangled, honestly, do yourself a favor and go watch it, it’s awesome), with all the lanterns.
I have some video of it, but I can't dump it into blogger :-(
So they all launch and the rest of us wait on the field freezing our butts off (did I mention it snowed a couple days ago, and we’re standing on the world’s biggest lawn in nothing but jeans and jackets? I have a terrible case of the dumb this year).
After the dawn patrol, the world looks something like this as the balloonists wait for the go ahead to inflate. 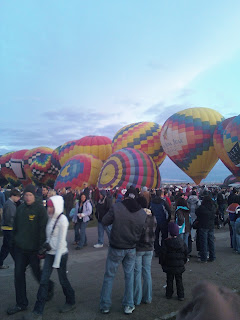 Usually they launch something like 800 balloons, but on Sunday they only put 500 up (yeah, I know, only) due largely to conditions on the field. When they do start to inflate, it’s like the world suddenly gets lost in rainbow valleys. No really, Valleys of Rainbows. 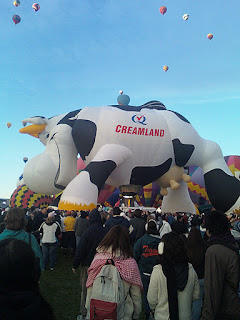 Then they inflate the cow.
Actually, I have a few pictures of the giant cow, and it looks like she’s—yes, she: her name is Airabell, a take on the dance maneuver she’s doing, the arabesque—a zombie rising from the dead "graaaiiinsssss." 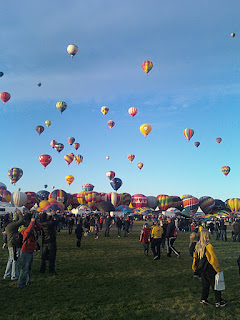 I love all the balloons,
but my favorite is this one.
I have better pictures from other years, including a bad photo of me standing with a storm trooper a full head shorter than me. It was awesome. This year it was no less awesome.
And does this have anything to do with writing?
Yeah, no, not a thing. Sometimes, I just like the silly gas bags (that's what we cal them here).
Posted by Rena at 8:17 PM 1 comment: