All I need is a swift kick in the pants

I have a cardinal rule for first drafts. This one rule makes me happy. It keeps me from going crazy and throwing things at the wall. It even keeps me from falling into crazy anxiety riddled place of great unhappiness.

I’m not saying it’s a good rule, just a simple one.

Rule of first drafts: Write them only for yourself.

That’s it. It’s my selfish rule, but there you have it. I write first drafts for me and only me. I write them so I can explore lame things that tickle my fancy. They are meant to be torn apart, after all, so why not make the first draft one that I love. It’s for me.

I have been breaking this rule. In fact, I’ve fallen so far into the pit of despair that I haven’t been writing on my rough draft all month. Yes, I’ve been teaching a crazy intense class. Yes I’ve been working my tail feathers off trying to clean up my dissertation. Yes, I have been sewing costumes for Dragon*Con (for myself and others). These things are all true, but in all that time, I haven’t so much as touched my WIP.

My anxiety climbed to a peak yesterday where I found myself asking an agent if she even considered portal stories (she basically said make the story interesting and make sure the most interesting thing to happen to the MC is not that she fell through a portal, which is really good advice). But the fact is, I had sunk so low that I was willing to toss myself on the tides of agent whims before continuing forward in my project. I was worried about what other people think.

That is a major violation of my cardinal rule of first drafts.

Ah, but here’s the hang up. This isn’t the first draft of this story. It’s a complete rewrite, and here’s where I made a terrible assumption.

My current WIP is a top to bottom rewrite where characters are being given new motivations, a larger view of the world, major plot elements have changed, and everything has to be rewritten from scratch. It’s getting the third to first person treatment. I’m adding a romance, kidnapping people, and putting an entire culture into civil war. This did not happen in the first run through of this manuscript. It is a new story. Literally.

But I’d assumed that because it still used characters I knew, it wasn’t a first draft.

Yeah, sometimes it takes a while for my brain to go from “brilliant” idea to actually functional. I’ve realized that even though it is a rewrite of a previous novel, it is a rough draft. I need to give it the space that I would give any rough draft. I need to turn off all the agents who say they don’t like portal stories (of course if they’re talking about the average, nobody finding a portal, I can see how that might get boring) and write. I need to write for me. I need to go back to that selfish place where I write whatever I need to. Let’s face it, when I write for other people, it sucks and I don’t like it. Chances are, the person/people I was writing it for don’t like it either.

Now that I’m over my personal crisis of faith, it’s time to get back to dragons, faeries, too many princesses and a faerie godmother who got dumped earlier that week.
Posted by Rena at 7:52 AM 16 comments:

Email ThisBlogThis!Share to TwitterShare to FacebookShare to Pinterest
Labels: the process

As I was rereading my set of Harry Potter books, I realized that I may have to buy another copy of The Prisoner of Azkaban. The binding is broken in four different places, and I’m pretty sure that the next time I read through it, it’ll buy the farm in the sky. Sad, but that’s what obsessive rereading will do to a book.

It made me wonder. Why had I read that book so many times that the book is literally worn out? What is it about that book? Well, there’s a long and a short answer. Those books matter to me. That’s why I reread them. Something in them speaks to my soul and makes me feel better. I don’t know what it is, but it’s in there. It’s not the excitement anymore (I have them memorized), but something in there puts my mind at ease and makes my life somehow easier.

I read a lot. I’m not going to divulge how much is a lot, but let’s just say that my reading habits could be compared to the eating habits of teenage boys. I’ve read books that I knew I’d never read again, and though I love the idea of a giant library in my home, I usually send those books on their way. I keep books that I either want to reread at a later date, lend to a friend, or save for when my children need a book like that.

There are books that make us laugh, cry, and scream. There are beautiful books like Looking for Alaska that make me wonder how I ever got along without it.

And then there are books where I want to scream at the author and say “How could you break your own rules for time travel without so much as pretending to give a crap about the laws of the universe as you ordered them? It’s YOUR universe! Write in it!”

There are books out there where I have rooted for the bad guys because I wanted to see the “heroine” get it. There are books where I was so frightened the heroine would get it that I couldn’t set it down until I knew she was safe. I bet you know the difference I’m talking about.

But those books that I keep coming back to, those books matter in some deep, profound way for me. I know I shouldn’t compare my books to other people’s books, but I just have one hope with my writing. I hope that my books matter. I don’t feel like my stories have much potential to matter the same way Looking for Alaska or Harry Potter have mattered to me, but that’s what I hope for. I’m not there yet, but that’s what the journey is for.
Posted by Rena at 7:53 AM 13 comments:

Email ThisBlogThis!Share to TwitterShare to FacebookShare to Pinterest
Labels: stories that matter

Inside my head (you might want to wear a hard hat).

I get the vast majority of my ideas while I work out. I know, the shower is the typical location, but what about me has made anyone think I’m normal? Right, so the sweaty, driving pace of cheap rebeats apparently drives the ideas straight from my sub consciousness into my frontal lobe (my only guess is that it’s some form of self defense against the mindless droning beats of pop music generally four or five years behind the time).

When these ideas strike, they are so complete, it’s almost impossible to ignore them. Sometimes they come complete with book covers and titles. Sometimes, even chapter titles. Thus is born the Shiny New Idea (SNI).

The only problem is when there’s a WIP currently on the typing block. Then there’re fireworks. It’s like a cage match between the SNI and my WIP and the cage is my head. And from somewhere, that movie announcer voice starts to narrate.

“Only one can survive.” And other cheesy movie tropes ensue.

Today, I was a good writer, and I put that SNI into a bin for later use. WIP wins, for today, but the road is perilous.

It made me strangely thankful to my favorite authors. They’ve surely had this cage match dozens of times in their heads and managed to pull WIP-that-became-a-cherished-novel out of the ring before SNI could pummel it into shreds.

So yeah, thank you awesome writers who write awesome books. I am in awe. Now back to work (“On Friday, Friday, Friday!” Oh shut up you stupid announcer voice).
Posted by Rena at 11:05 AM 2 comments:

Email ThisBlogThis!Share to TwitterShare to FacebookShare to Pinterest
Labels: SNI, the process 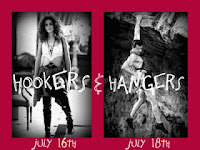 And now for the second half of the hookers and hanger’s blog fest hosted by the lovely ladies over at Falling for Fiction. Check them out, they’re a great follow.

These are my three favorite hangers from my current work in progress, PRINCESS SINGULARITY (that’s a working title).

Chapter 9
Magic was real, wishes came true, and it was only Wednesday.

Chapter 13
The problem with fancy dinners: I couldn’t decide which fork to stab him with.

Chapter 28
“No one screws with my happily ever afters!”

I wanted to lay a big thank you out to the organizers because this has been a fantastic blog hop. I’m always hesitant to sign up, and every time I do, I have the best time, so thanks again! (Seriously people, go check out Falling for Fiction, they are awesomesauce on Crème Brule).
Posted by Rena at 7:43 AM 24 comments: 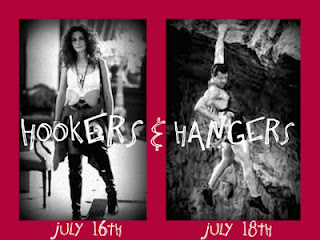 So today is the start of the Hookers and Hangers Blog hop hosted by the lovely ladies over at Falling for Fiction. I’m going with my first three chapters, and already I can see that I need to work on these. I usually don’t write with the intent of making a sensational first line (except for chapter 1, but I already know that I need to cut that part out and stick it where it belongs almost 100 pages later). Hop on over to Falling For Fiction, sign up and spend some time reading around. (I can’t wait to see what other people have!)

Chapter 1
Shoes. If anyone ever asks what I was thinking as I fell through the interdimensional portal to Underhill, I can honestly say, "shoes."

Chapter 2
While holding a love letter from the crush of my dreams to my dear best friend, I did what any sane girl would do: I fled to the bathroom.

Chapter 3
I waited until I heard the janitors.
Posted by Rena at 7:48 AM 25 comments: