I thought we'd figured this out already...

A study just came out which found a significant gap in the perception of men and women in science. And it was a big gap. Men are simply seen as smarter and more accomplished. This is sadly a fact. They gave scientist a one page summary of accomplishments for a potential hire. They gave out the same summary to scientist in physics, biology, and chemistry. The only difference was the name of the potential candidate: one was named Jennifer; the other was named John.

I play hockey in a co-ed league, and something that always comes up is should we make special dispensations for women hockey players. My answer has always been "no." Hockey is a game of speed and skill, and in my opinion, if a man isn't fast enough or skilled enough, they don't belong in the league and neither do women who can't cut the mustard. If, however, women are skilled enough and fast enough, then yes, they should play. That's it. The only difference is the gear they have.

All my life I've seen barriers come down for women. I've felt like we were closer to bridging this gap. I'd even started to feel like there wasn't as much gap left (despite my time in a very misogynistic physics department). And now I see this.

Email ThisBlogThis!Share to TwitterShare to FacebookShare to Pinterest
Labels: it seems impossible, psa

I love going to Dragon*Con. There's something about hanging out with that many people who are all interested in the same things I am. And then of course there's the costumes. I start sewing months (literally) before the con because that's how long it takes, so it doesn't impact the rest of my life (or in this last case my dissertation).

And I really do love sewing. I love taking this: 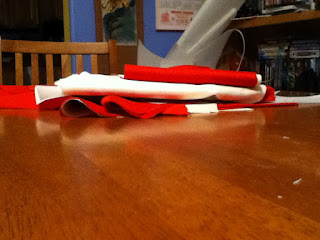 And turning it into this:

This year I made two Iroh costumes (from legend of Korra, and The last airbender), a green lantern McGonnugol, Cirdan the shipwright, and a yellow lantern Dr. Horrible. 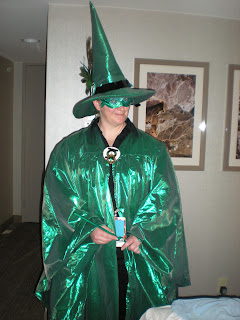 And I have to say, going as Green Lantern as a witch was one of the best experiences ever. I had little kids coming up to me to ask for my picture. They wanted to know why they hadn't ever seen a green lantern witch on the show. It was too cute.

In fact, the whole con was so much fun, we bought tickets for next year. Now all I have to do is figure out what to wear...
Posted by Rena at 7:52 AM 7 comments:

Email ThisBlogThis!Share to TwitterShare to FacebookShare to Pinterest
Labels: Dragon*Con

They call it a defense for a reason

In a turn of what can only be called irony, I have conditionally passed my PhD defense. They said my talk was fantastic. They told me that the science is great. They said that my understanding of the subject is sufficient. Then they said my writing was really pathetic.

As it turns out, in science writing there is an epidemic of terrible writing (don't believe me? I could give you some links to cure insomnia). This might be a philosophical issue, but I think the root of the problem is the washing away of all active verbs. The problem with active verbs is that someone has to do them. The scientist analyzed data; the researchers collected samples; the rocks formed in an acidic environment.

Now, those first two examples are almost okay, but use something that direct in a science paper and watch the fireworks. The third one? That will make peoples heads explode.

Instead of all this responsibility taking language I've been laboriously trying to craft (you know, from writing novels and stuff), I'm supposed to cleanse my work of active everything.

CAIs altered on the parent body.

What they want me to write:

CAIs were altered on the parent body.

What I want to write:

We analyzed the data.


There were other problems too (some I even agree with), but I thought you writers might get a kick out of the difference between academic writing and fictional writing. And for me, it's back to a mountain of revisions. Man I hope this works.
Posted by Rena at 7:24 AM 6 comments:

Email ThisBlogThis!Share to TwitterShare to FacebookShare to Pinterest
Labels: the dissertation made me crazy don't listen

I know, I'm busy working away on my defense, but I scrounged up a few minutes, so I thought I'd warn everyone that today is, in fact, talk like a pirate day. (I suck at this for the record).

I don't have a lot of piraty advice other than to reccomend some rum. Specifically Pyrat rum. It is fantastic (if you're old enough to drink, that is). This is absolutely my favorite rum.

And if that's no help, I have the great pirate joke:

What's the first letter in the pirate alphabet?

What's the last letter in the pirate alphabet?

What are all the letters in the pirate alphabet?

Now you're armed for talk like a pirate day. Avast yee skallywags (I told you I suck at this part).

As many of you know, I have a daughter who is cute beyond measure. That particular attribute may be the only reason she's still alive considering her late night antics.

No, the time change doesn't help either.

So this morning I was shocked that she didn't come wake me up. She'd woken me up twice the night before, not sleeping well and having bad dreams, but that never translates into sleeping in. I got dressed and ready to go, but still she slept. I opened her door and turned on the light... snooze city. Finally I woke her up.

I can now clearly see what she'll be like as a teenager...

Right, so I went to dragon*con, turned in my dissertation, and basically had one of the hardest weeks ever. But we'll talk about that some other time.

Today, I want to share the awesomeness of wordle.

Word clouds are pretty incredible because you can see what words you use all the time in your document. For instance, this is my entire dissertation. That pretty much sums it up. 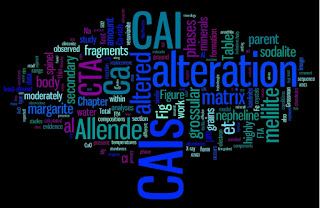 You see pretty quickly that my dissertation is about the alteration of CAIs. Neat right?

Well, then I put through chapter one of my WIP... 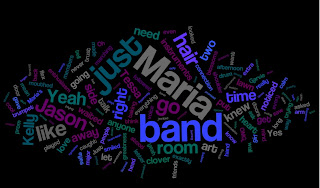 Do you see my problem? Just. The "just" is almost as big as the word "Maria" who is a centerpiece of that scene.

So this is why wordle is a really good tool. This is also why word clouds can be really embarrassing. If a word like just makes my word cloud, that's a problem. And now I know I should probably eliminate a few of them. So happy wordle to you all.

Email ThisBlogThis!Share to TwitterShare to FacebookShare to Pinterest
Labels: Wordle is a tool not a toy
Newer Posts Older Posts Home
Subscribe to: Posts (Atom)