But here’s where I’m going to try my optimism on for size (it hasn’t fit properly in the past, so stand back, this might pop some buttons).

2013 was a big year for my writing. I learned things I didn’t expect to. I didn’t get an agent or land a publishing contract, but I planted a lot of seeds. I got a lot of invitations. I learned. I grew as a person—though at times I didn’t grow as a person at all. Sometimes what I really wanted was a hug, and a lot of the time I just wanted to be ten so I could climb into my tree fort and throw rocks at the bad guys who lurked in the nearby trees (conveniently placed in the cruxes of branches to be knocked over when I really needed it). At one point I whined to a friend that while I wanted to be more like Iroh, I was all Zucko.

But even Zucko finds his way in the end, so maybe being Zucko isn’t so bad. Just because his path wasn’t the convenient one doesn’t mean his path was any less because of his wrong turns.

And boy have I made wrong turns.

I think that if I were going to give Zucko advice, I think I would ask him to take it easy on himself. He holds himself to such high standards, and he’s always frustrated because he hasn’t gotten there. His goals are out of reach, but along the way, he does amazing things. He shapes the future by just passing through.  If only he could see his own greatness, but all he can focus on is how he didn’t do the things he set out to do.

In that, I am all Zucko.

So, here’s what I actually did in 2013:
I rewrote one novel twice. From scratch, both times. Talk about a test of endurance. And better still, I absolutely love that book. I’ve already decided that if it doesn’t find a home in traditional publishing land, I’ll probably look into self pubbing it. That being said, getting through the traditional publishing gauntlet could take a long time to wait and hear back, so that can’t really go on the goals for 2014 (maybe 2015?)

I finished two different first drafts. One of them I wrote 60k of the words in 2013, one was start to finish in 2013. So look for me moaning about editing those in the upcoming months.

I also started two different novels that I haven’t yet completed. One is definitely taking up more headspace than the other, but still, they account for a pretty good chunk of words and time.

I am going to self pub a novella (under a pen name, though I doubt this will be any kind of secret, so look for me to announce it).

I am going to read more books. I think I read something like fifteen books in 2013. That’s just not enough, so I’m going to aim for twenty this year (I want to be able to reach the goal).

I am going to finish my WIP. Considering that I’m at Act II, I suspect I’ll finish it either in January or early Feb.  It’s a strange project, entirely unlike what I normally do, so it’ll probably also go out under a pen name as well (which is why you don’t see it here).

That’s it for my goals. A year is so hard to predict that I think that’s plenty of goals. Well, I’d like to be a bit more Iroh. Maybe I’ll try to make peace with my Zucko nature… and drink more calming tea.
Posted by Rena at 6:04 PM 14 comments:

As my post on Monday probably clued you in, I have about as much free time as you could expect from someone packing two houses and moving in seven days. In fact, I'm calling the cable company today, so I probably won't even have internet by tonight. Yay.

That means I don't have an Insecure Writer's Support Group for you. If you came looking for one, check out my previous ones (hint, the insecurities don't go away, you just start to make them a little quieter).

Sorry I don't have a good one for you this month, I'll leave you instead with Tea Thief wants more Tea (What do you mean you were working on something? I'm working on not having any tea in my system!) 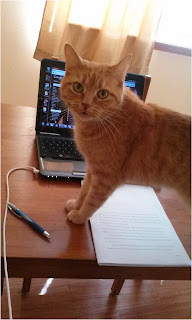 Well, I'm pretty bummed that comet ISON didn't survive it's sungrazing trip. I read a book about people who flew ships into the sun's coronosphere to collect it's energy when I was a kid, so maybe that's why I was so captivated by the comet.

But Thanksgiving was fun (except for the traditional plague the child had), and I've now eaten my years turkey quota--unless I manage to take in a ren faire.


Right, I've got nothing. Have a picture of the Tea Thief: