Okay people, I have a confession. I am a bad twitter person.

This isn't because I'm bad at tweeting, no, not at all.

I have never--not once!--ever bought something that someone tweeted about. Not once. Not ever. And this is NEVER going to CHANGE. So all you people tweeting two times an hour seven days a week? I consider you spam. Have nothing on your twitter feed but promotion and "I got a four star review on amazon," quite frankly, I don't care.

So when someone on twitter follows me, I click to their full profile and check out their last ten tweets. If more than one of the last ten tweets is a promotion for their book (and none of the other ones are OMG, MY BOOK JUST CAME OUT! because seriously, people get to be crazy when their book releases) then I don't follow back.

Yeah, I know, this sort of means I'm an evil witch, but really, I'm old enough to know what my time is worth.

When I sign on to twitter, I'm not interested in having advertisements thrown in my face. I use twitter to check in with my friends, see what's going on in NYC (because most of the people I follow are agents and editors in New York... with some notable exceptions in California, Colorado and Minnesota), and maybe catch some awesome pictures of the planet from Chris Hadfield. If I have to wade through a hundred tweets about four star reviews and BUY MY BOOK!!!!! this makes me a little cranky. It's inefficient. It makes Twitter not do the one thing that Twitter does really well: Twitter lets me interact with people very far away. When my feed is full of spam, I don't stay. It's not interesting.

So I've stopped following people back. And thus has begun the dreaded follow/unfollow/follow.

People, I am here to tell you that if you seem decent, and are a writer and your last ten tweets were not about your book, then I'll almost always follow back. But if you are a spam bot, and you never link to content, only buy buttons, then I'm not interested, and no amount of follow/unfollow/follow will catch my attention. Ever. I saw you the first time. And the tenth time. If I haven't followed back by the end of the week, it ain't happening. And you know why? It's because Twitter is not free advertising. It never was. You have to build a following or else you're just a spam bot. You build a following by posting content, being interesting and above all else: INTERACTING. That's what Twitter is there for.

Sure, I don't tweet often, and most of it is about contest and writing, but that's where I am right now. I try to interact with people (like agents and editors and other authors), but mostly on twitter, I don't have a lot to say, so I spend my time watching. That means I know. Spam is spam. On Twitter, in email, if you spam, I will delete you. I'm tired of it.

And before people go crazy about needing to promote their books, here is the truth: I don't buy books from spam bots. I buy the books that my friends (you know, the people I interact with on Twitter) tell me are amazing. But I don't trust them if they haven't put out enough content for me to judge their character. I mean really, if all people ever did was spam the feed then how would I know if their recommendation of The Bridges of Madison County would mesh with my Pacific Rim loving personality? Twitter is a great way to figure that out, and if you're just spamming, no one can ever learn that from you. And trust me, if you just released a Bridges of Madison County and billed it as a must read for my Pacific Rim loving soul and I "fall for it"? You just got one sale. But I'm going to trash your book because you pitched it as Pacific Rim and it was Bridges of Madison County. I'm going to tell everyone--EVERYONE. And I know a lot of people despite my twitter numbers. In short, if you lead me in with false advertising, you're not doing yourself any favors.

So tweet, follow, do whatever it is that you want, just don't feel like I'm obliged to follow you to "boost" my numbers. I mean seriously, have you seen my numbers? I follow a ton of people and literally have half the number of followers (George Takei hasn't followed me back! My life is now in ruins!), I'm not that worried, because honestly, one real follower who actually listens and isn't a spam bot is worth twenty spam bots. Think about it.

Trusting your gut, even when it changes its mind

I got this desk, and I can't help myself: I think I'm in love.
I know, you all are starting to think I'm a little insane--seriously, read more of the blog, and all doubt will be removed--because who loves a piece of furniture?

I bought a beat up old desk from a second hand store. It had been spray painted white, and I couldn't see the original paint or finish, but I could tell it was real wood and not some crappy particle board thing. I thought, "Well, it's real wood. I'll take it home, give it a light sanding, paint a mural on it and then I'll have a writing desk." The desk had a cracked corner, so I'd need to glue it back together. Someone had used it as a saw horse, so it had a pretty good nick in one end. And the paint job was hideous, but paint could be painted over.

I paid the man ten bucks and stuffed it into my car (never underestimate the trunkspace of a car driven by a woman on a mission), and when I got it home, I started sanding. I think my father misunderstood me and pulled out a belt sander. Figuring that if we could strip it down to the wood, that would be better in the long run anyway, I let him. After all, a mural doesn't care if it's on bare wood or a crummy paint job.

The white layer gave way to a red layer which gave way to layer of grey primer. Under that was a thick varnish and a thick stain.

Under that was real wood.

So I decided to strip it using chemicals (generally faster than power tools), and the first $20 bucks went into the desk. As I worked on getting through the layers, I decided I could stain it blue, and then paint a mural on it. I'd love to have a blue desk. So I bought some stain, some conditioner and some varnish, another $30.

We worked and worked and worked. Two weeks of sanding, stripping, and repairing. By the end, the wood wasn't just nice, it was gorgeous. As in, it wasn't some cheap old desk. In fact, I found the manufacturer's tag. The desk had been made in February of 2005. And I'd been worried about lead paint!

But then it came time for the stain, and the wood was just so beautiful. I already had the stain. And I'd always wanted a blue desk, but well, the wood was beautiful. I took a board that wouldn't be seen and I put the blue stain on one board.

I just stood there staring at the desk, beautiful pine grain glinting in the sunlight like gold and thinking to myself "well, I already bought the stain, and I wanted a blue desk. I've always wanted a blue desk." But then my stomach would tighten up. "But it's so beautiful as it is."

So I put the stain all back in its container (labeled it hideous and user beware), and went about happily varnishing my desk. No stain. I have a naked desk.

And I'm in love. Here, see for yourself.

I left that one board stained blue as a reminder. Sometimes, our instincts are great. Sometimes they change. I think when I'm writing I have big ideas that are sort of like the blue desk: reality is hideous, but the natural grain is amazing. Trusting my gut is something I've been having a hard time with, but I'm learning, and boy howdy, I'm glad I followed it for my desk!

IWSG--It's hard out there try to let it go 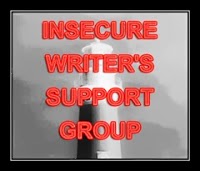 IWSG is run by Ninja Captain Alex. Head on over, check it out, and jump on the linky!

I’m late to posting. I’ve been dithering all morning. I should have just posted on the first of the year. Now I’m insecure about things I shouldn’t talk about, you know, professional stuff.

This is easily one of the hardest parts about being honest as a blogger and a writer. There are things you shouldn’t talk about on the internet because if things go your way, you could have editors interested in your book scouring over your blog. That’s no big deal if you’ve kept your nose clean and managed not to vent your frustration at publishing and or the writing process.

And let’s face it, waiting is hard. Every now and again, even I have a disparaging thought about this industry. Why does it take so long? How come every agent doesn’t send some sort of response? Why are all the books that are getting requests/agents/bookdeals derivative of UberBlockbusterOfDoom?

So instead of talking about my own trials and tribulations—the waiting and the wondering—I’m going to offer this up.

Sometimes, it’s not about how good of a writer you are. Sometimes, you have a great book. Sometimes your writing is beautiful, the book would win prizes left and right, it really could be wonderful on the list of a publisher, but none of that matters because there’s luck involved. Someone needs to have the perfect reaction to your book at just the perfect juncture in their life. What would sell a year ago is now the kiss of death, and it has nothing to do with how good the writing is.

In the mean time, pick yourself up, keep writing, keep querying. Good luck out there, and remember we all feel like this after we’ve been in the thick of it.
Posted by Rena at 10:09 AM 17 comments: