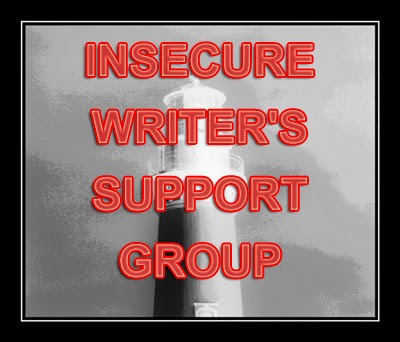 Insecure writer’s support group is the brainchild of Ninja Captain Alex. I recommend that you go visit him at his blog, and then sign up on the linky or visit the IWSG website. Good stuff. This month's cohosts are Tina Downey, Elsie, Elizabeth Seckman, and Julie Flanders.

Today isn’t so much an insecurity as a cautionary story about perspective, and this one might frighten you.

There’s a little house not far from where I grew up. It’s a small house, quaint and set in some of the most beautiful land on earth. Every year, daffodils bloom in the yard despite no one watering it for decades. The bushes grow, bloom and go dormant. Every year, the world ticks by, but that house, that hundred-year-old house waits for something to change. In that house lives a person whose dreams have been crushed. The great wheel of publishing has destroyed her spirit. She is broken.

She is a writer.

No, that’s unfair. To be a writer, you have to write. She was a writer, and once upon a time, she wrote a novel.

Now, as many of you know, self publishing is not the vanity insanity it used to be, but she was sucked up by the biggest of them all. She was taken for a ride. She bought the biggest package, with the biggest advertising. She spent many thousands of dollars.

Twenty years later, she still has boxes and boxes of her novel with a paid-for blurb on the cover and boxes of promotional gear (bookmarks, and postcards, mostly, but hundreds of them, never seen by her target audience).

My guess is that she sold copies to her friends and family. Twenty years ago, it was hard to reach an audience. But she got hung up on that one novel. She got stuck there, and for the last twenty years she hasn’t written a thing.

I opened the book and found typos on the first page.

This woman scares me. She is like that crazy funhouse mirror for me, except I see myself in the future, not warped and lumpy in the present. I have my ideas and my dreams and my stubbornness, but she was destroyed by something she could not control: and she could never move on, surrounded by her unsold copies of a book riddled with typos.

I have, on more than one occasion, said that there is a particular novel that I have every intention of self publishing should more traditional routes not work out. This would be the red flag everyone says means that I’m not right for self publishing, that I’m just a jaded writer, too stupid to see that my work is flawed. I understand why people say that, but there’s a reason that so many people try traditional publishing before going with self publishing. It doesn’t always make for jaded crazy writers, and truthfully, if you’re on the fence between the two venues, trying to go traditional makes sense because you don’t screw up your chances at self pubbing if things don’t work out. If you self pub first, however, you can kiss traditional publishing good bye. This is just an issue of practicality, unless you let yourself become one of those jaded writers. To succeed in publishing, you must first accept the possibility of failure.

I can accept that. Hell, I should be the president of fail club.

It is completely possible that, as I’ve noted before, I’m untalented and unaware. It wouldn’t be the first time. But I think the real reason people talk about not self publishing when you’ve failed to publish traditionally is that everyone is thinking about the cautionary tale in the quiet house. One book, thousands of dollars and a handful of sales. Much of which could have been avoided if someone had just pointed out some typos.

When I say that I want to pursue traditional publishing first, it’s not an either or scenario. I think that traditional publishing has a lot to offer. I think that self publishing has a lot to offer as well (Like I’d get to design my cover!!! I know that scares some people, but I did some time as a graphic artist—paid even!). Clearly, selfpubbing didn’t offer much to writer in Quiet House. That trip into self publishing killed her dream. She couldn’t get published through a traditional publisher, didn’t do her research, and had her coffers drained. She got stuck in the moment, convinced that everyone would see her genius once her words were published.

This is a sticky situation because there are lots of self pubbed novels where the writer tried to go the traditional route, got stymied due to strength of pages (or lack thereof), and THEN had the rug yanked out when the rest of the world told them the same thing. Ouch.

Let’s be frank, I have no such delusions (I can barely manage to sustain delusions of mediocrity let alone grandeur!). People aren’t going to read my work to be wooed into the beauty and poise of my words (heh, I used the word poise like I owned it!). When the time comes, people will read my work for the explosions, the laughs, and probably the chase scenes. There might be some other bits that spark interest here or there, but I’m not holding my breath. Awards? Hell, I’d be lying if I said I didn’t want them (I still blush when I get blog awards, people), but I’m old enough to know that they sent two thousand athletes to the Olympics, and they only handed out 98 medals. And by publishing standards those are really great odds.

When my book is published (because seriously, if I know one thing, I can out stubborn a mule), I know that it’s possible I’ll sell a few handfuls. Even if I make a “big publisher” it’s always possible that the book will sell so poorly that a few handfuls would be considered a generous accounting.

That’s why writers must never stop the one, fundamental thing that makes us writers: we write.

If you self pub, and your heart is broken, there are pen names. If you traditionally pub and you get dropped, well, there’s a way to recover from that too. If you’re just starting out, railing against how long it takes to hear back on a query, I got news for you: publishers take longer than agents, so get your waiting boots shined up.

There are lots of reasons to be frustrated in this journey, but there is only one way to be a writer today: write.
Posted by Rena at 10:38 AM

Email ThisBlogThis!Share to TwitterShare to FacebookShare to Pinterest
Labels: IWSG, pep talks actually aimed at me