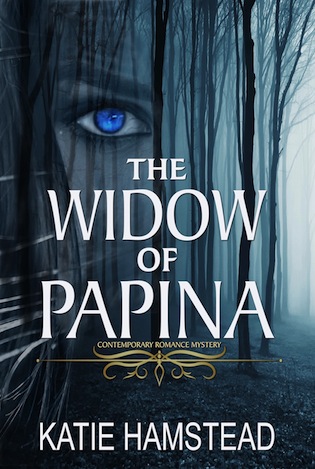 Forrest and Braydon Miller moved to the small town of Papina to follow their dreams and start a family. Braydon loves her new life in the quiet town, kept alive by the prestigious boarding school overlooking the valley. She is so proud of her husband’s work, helping the teens on the reservation.

Scandal spreads when it’s discovered that one of the teenagers is missing, too. But, Braydon refuses to believe her husband would leave her. When the teen is found, she isn’t talking–literally.

While Braydon’s heart is breaking, she must hold her crumbling life together, raise her son, trust in the Sheriff’s loyal, and ever-growing devotion, and find a way to love the MUTE teenager enough to discover the truth of what happened to her husband.

Born and raised in Australia, Katie's early years of day dreaming in the "bush", and having her father tell her wild bedtime stories, inspired her passion for writing.
After graduating High School, she became a foreign exchange student where she met a young man who several years later she married. Now she lives in Arizona with her husband, daughter and their dog.
She has a diploma in travel and tourism which helps inspire her writing.
When her debut novel, Kiya: Hope of the Pharaoh, climbed into bestselling status, she believed she was onto something, and now has a slew of novels now available, and is published through Curiosity Quills Press, Soul Mate Publishing, and REUTS Publishing.
Katie loves to out sing her friends and family, play sports, and be a good wife and mother. She now works as an Acquisitions Editor to help support her family. She loves to write, and takes the few spare moments in her day to work on her novels.

Prom, Magic, And Other Man-Made Disasters: a Book Birthday!!

Today, I have unleashed my book onto the world: 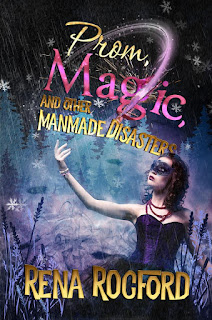 Before Tessa can confess her feelings to her long-time crush, he beats her to the punch and confesses his love—for her best friend, Maria. Missing the crush of her dreams and her stag wingman for prom, Tessa’s on the prowl to make it a night to remember, and for more than the humiliation. Determined to not be the only dateless girl at the prom in Small Town USA, she asks the new guy. He has all the qualifications of a fun date: polite, mysterious―pulse―but the way Sean talks about magic like it’s real could ruin the illusion. But desperate times call for desperate dates.

To make matters awkward, Maria insists on double-dating for the pre-prom dinner. When a wizard shows up and kidnaps Maria, things go from jealous to deadly before the cummerbunds hit the floor. He’s mistaken Tessa’s friend for a powerful mage whose blood could help him conquer his world, but he’s got the wrong girl. Using the wrong blood wouldn’t make Maria any less dead, and Tessa has no plans to let some whack-job villain from another dimension murder her best friend. Working with Sean, she tracks the wizard to his home, a land filled with strange creatures, stranger customs, and a five-hundred year grudge match between three nations ready to explode into all out war.Tessa’s starting to think she has a chance against the wizard so long as she has Sean by her side, but his kind words and sweet smile aren’t what they seem. He’s the wizard’s son.

Buy it on Amazon.

Add it to Goodreads.

Things I love: The Jack edition 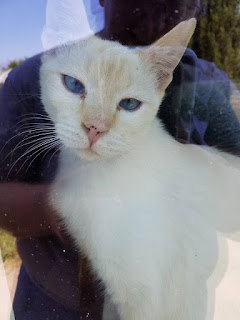 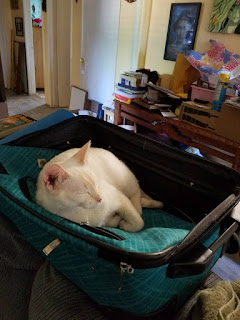 No he shouldn't be up there. 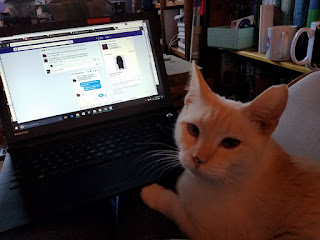 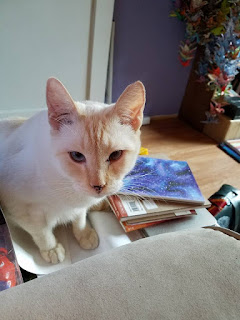 He likes to join in 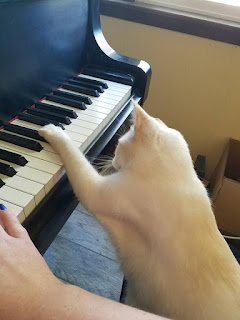 And yes, he has a natural habitat: 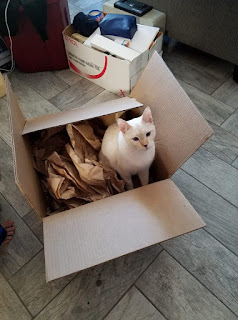 Email ThisBlogThis!Share to TwitterShare to FacebookShare to Pinterest
Labels: cat, Things I love

I went and saw Thor: Ragnarok this weekend, and I gotta say, I thoroughly enjoyed it.

It was a fun romp, almost exactly as advertised. There is no romance (it's been replaced by the buddy feels), and it was always entertaining enough to keep my inner curmudgeon from raising it's head. Were there plot holes? Yes. Did they play gags? Yes. But it was fun. I cannot stress how awesome it is to have fun.

The interesting part is that it felt like the first Avengers movie.

Any thoughts? Any haters? No spoilers in the comments please, but if you want to have a longer discussion, you can always @RenaTheWriter and we can keep it going there (where I will talk to people in 280 characters, practically a novel, really!).
Posted by Rena at 5:58 AM 2 comments:

Email ThisBlogThis!Share to TwitterShare to FacebookShare to Pinterest
Labels: Things I love

I think the thing I’m most insecure about is ever connecting with my audience and who that audience might be.

I am constantly under the attack of “that’s not what teenage girls are like.”

I think that’s my favorite statement ever. I love it because it seems to always come from men, but also because it completely ignores the fact that there’s no one thing that teenage girls are like. If you had fifty teenage girls in the same room, yes there are going to be some commonalities, but there’s going to be a huge spread about what they like and what they want to do. More importantly, there’s going to be a huge spread about who they think they are.

Caveat: I say think because the first encounters you have with college and adult life afterwards sometimes destroy who you thought you were in highschool. And sometimes, it only hardens it. One of my favorite quotes after coming back from college was that someone said “Wow, you haven’t changed a bit.” To which I replied, “I’ve changed a lot!” And the kind person said, “I know, but you’ve become so much more you than before!”

I digress. My point is that people are different and they have different desires. When I was in high school, there was this terrible choice you had to make: You could either be tough and sporty—able to change your own tire and throw a pass—or you could like pretty things. I see now that it was just another way for society to try to change me into a less powerful version of myself by letting me be tough, but denying me something that I really wanted.

As an adult, I see that it was a falsehood. Who would have stopped me from wearing pink fingernail polish while changing sparkplugs? Would the fashion police have stopped me if I’d worn a cute dress before the game? (okay, well, after the game, that might not have been as practical, but still). My point is I liked to do things where you got your hand dirty AND I liked pretty things.

And then I remember how I was forced to choose, how society didn’t seem big enough for my peers to not tease me mercilessly for have diametrically opposed likes. How could I possibly like fingernail polish and soccer? They teased me when I dressed nice. They teased me when I painted my nails. They told me I wasn’t taking my sports seriously enough.

It was all a lie.

Every scrap of it.

So when people tell me that “teenage girls aren’t like that,” I tell them to fly a kite. My only concern is that when you write a book with a character like the person I was, constantly rubbing against the grain of what others want you to do, it can be hard to find my audience.

Because my audience are the people who are still struggling with who they are and what they like and how life has pigeon holed them into “but that’s not what teenage girls are like.” I know there are people out there who are struggling, but trying so desperately to fit in, and I’m worried that their trying so hard to fit in makes them close off to the things they might actually love. And those people are my audience. I’m literally trying to reach the kids who are hiding who they are because they fear being called out the same way I was called out. In short, the people who might literally be afraid to pick up my book for fear of not fitting in.

Whelp, if you made it this far, fantastic! Consider hopping on the link and checking out the Ninja Captain himself, Alex! And a special thank you to this month’s co hosts: Tonja Drecker, Diane Burton, MJ Fifield, and Rebecca Douglass!
Posted by Rena at 6:17 AM 3 comments: